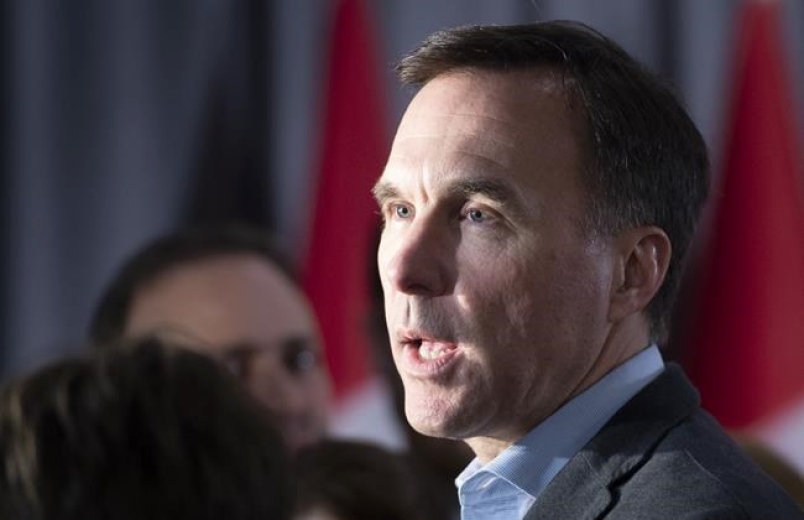 Morneau made the comment after giving a speech in Aurora, Ont., where he was asked if Ottawa has any plans to help first-time buyers enter the housing market at a time of rising interest rates and mortgage costs.

Housing, with all that it means for people’s personal finances and lifestyles, is expected to be a prominent campaign issue ahead of October’s federal election — and major parties have already begun to position themselves.

Morneau told the business audience that the Liberal government has focused on three housing-related issues since coming to office in 2015: Canada’s shortage of affordable housing, a run-up in real-estate prices in some markets and ensuring millennials can afford homes.

The federal government, he said, has already tried to increase the supply of affordable housing and to cool the hottest markets — such as Toronto and Vancouver — by introducing stress tests that limit some people’s ability to take out big mortgages.

“The middle part — the big middle part — is the affordable housing for millennials,” said Morneau, who will release his election-year budget in the coming weeks that will also lay out Liberal platform commitments.

“That’s a real challenge and there’s multiple things we’re looking at in order to think about how we can help in that regard.”

Morneau didn’t elaborate on what options are on the table. A spokesman for Morneau later declined to offer more details.

Higher price tags in some markets have created concerns among younger Canadians hoping to borrow money to purchase homes.

Where Morneau was speaking in Aurora, about 50 kilometres north of Toronto, real estate has shot up in price about as quickly as it has anywhere. According to the Toronto Real Estate Board, the average price for all types of housing there was $810,000 in December. Detached homes were going for more than $918,000.

Conservative MP Karen Vecchio argued in a statement Tuesday that Trudeau government policies, including its carbon tax, have made housing less affordable.

“Justin Trudeau’s policies are making life more expensive for Canadians, pushing their dream of owning a home further and further away,” Vecchio said.

On Monday, NDP Leader Jagmeet Singh proposed measures he insisted will help build 500,000 new affordable housing units across Canada over the next 10 years.

Singh only offered a few details, but said Ottawa should stop applying GST to the cost of building new affordable units, provide a subsidy to renters who spend more than 30 per cent of their incomes on housing and double a tax credit for first-time home-buyers to $1,500 from $750.

In fall 2017, the Liberals unveiled a 10-year, $40-billion national housing strategy, which the government has billed as a plan that will provide more social housing and affordable rental units.

In their 2015 election platform, the Liberals also promised to enhance the popular Home Buyers’ Plan, which enables first-time buyers to borrow up to $25,000 tax-free from their registered retirement savings to put towards the purchase of a home. The amount must be repaid within 15 years.

But the Liberals haven’t appeared to be in a hurry to fulfil the pledge, which would enable Canadians affected by major life events — death of a spouse, divorce or taking in an elderly relative — to dip into their RRSPs to help with the purchase of a home.

Internal documents obtained by The Canadian Press via the Access to Information Act have revealed the Liberals have had second thoughts about the idea out of concern expanding the plan would throw fuel on overheated housing markets.

The promise to modernize the plan has been labelled “Actions taken, progress made, facing challenges,” according to a website the government created to track the tasks Prime Minister Justin Trudeau assigned to his cabinet ministers.