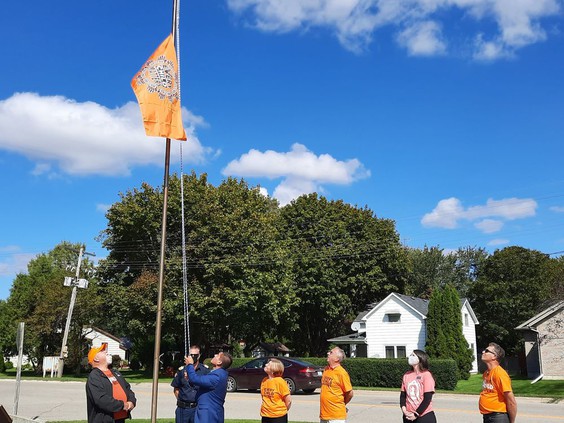 The raising of the Every Child Matters flag. Among those in the photo are, from left: Mayor Bob Purcell, Chief Adrian Chrisjohn, MP Karen Vecchio, Deputy Warden Dave Mennill, representative of MPP Jeff Yurek, Delaney Leitch. Victoria Acres jpg, WE

Sept. 30 marked The National Day of Truth and Reconciliation, also known as Orange Shirt Day, to recognize the injustice done to the Indigenous Peoples in Canada.

Regarding the day of Truth and Reconciliation, Jessica Small, Recreation Administer for Dutton Dunwich, shared, “The Councils of the Municipality of Dutton Dunwich and the Municipality of West Elgin carried a resolution that National Day of Truth and Reconciliation on September 30th would not be considered a holiday for staff but rather an opportunity to work in collaboration with our Indigenous neighbours, partners, survivors and families to ensure the respectful commemoration of this day within our Municipalities.”

The County of Elgin also recognized the day. A statement was released that said, “The federal government is recognizing September 30th as the National Day for Truth and Reconciliation in Canada, a day committed to reconciliation with Indigenous Peoples and ensuring that the tragic history and ongoing legacy of residential schools is never forgotten. Events and programs are being hosted and/or promoted throughout the County of Elgin and local municipal partners to acknowledge the day. These events and programs include:

Flying an orange “Every Child Matters” flag at the Elgin County Heritage Centre and municipal buildings. Municipal staff were also encouraged to wear orange on that day.

Drumming ceremonies and associated events were held in West Elgin and Dutton, held by those respective municipalities.

Elgin Warden Tom Marks said, “We know we have a long road ahead of us on the journey to true Reconciliation for the tragic policy of residential schools that impacted so many generations of Indigenous Peoples in Canada, these events on September 30th are at least one sign that the County of Elgin and our municipal partners are committed to taking this journey to promote healing, respect and Reconciliation with Indigenous Peoples in Canada.”

The acknowledgment reads, “We will begin by acknowledging that the land on which we gather is the territory of First Nations people who have long standing relationships to the land, water and region of Southwestern Ontario. We also acknowledge the local lower Thames River watershed communities of this area which include Chippewas of the Thames First Nation, Oneida Nation of the Thames, Munsee-Delaware Nation and Delaware Nation of Moraviantown. We value the significant historical and contemporary contributions of local and regional First Nations and all of the Original peoples of Turtle Island (North America). We are thankful for the opportunity to live, learn and share with mutual respect and appreciation.”

Chief Chrisjohn started his speech with a custom from his own culture, a welcome in his own language. He then explained he is not as fluent in it because “the culture, and language, was nearly beaten out of his people”. Chrisjohn went on with his address, saying: “The National Day of Truth and Reconciliation should be treated like Remembrance Day, and not a celebration. It’s a memorial and a time to reflect and maybe learn, it’s a remembrance of all the little lives lost.”

He also explained that “I think when we talk about reconciliation, there is a truth that must be understood, but that truth is one that is often traumatizing — they need time. They need time to acknowledge, and heal, and work up that courage to share.”

He then shared his own family’s interaction with residential schools.

Chrisjohn said, “It’s difficult to think that back in the 1950s, my family was approached on Oneida. My uncle pulled out a shotgun and that’s the only reason that they didn’t take my dad, and could be the only reason I’m here. I’m thankful to that uncle even though he is no longer here.”

His speech ended with a call to action/ “Your tax money is going to fight my people. The courts still argue with us on issues which take money and time about public safety because they do not believe our policing is enough, about the fundamental human right to clean water. We need your voices to join us. If you come to our communities I think you would find that we are not so different: we love our children, we love our families, we have jobs and we work hard.”

A drumming ceremony followed, while Coun. Amarilis Drouillard explained the significance of drumming in Indigenous cultures. “The beat of the drum symbolizes the heartbeat of Mother Earth,” she said.

Drouillard also shared how difficult it was to share her story for both “reasons simple and complex”.

She explained “My father always told me that his stories were not to leave our house, and so I came here worrying that I was disrespecting the spirit of my father by sharing his story without his permission. I also worried that I was sharing stories that are not mine to tell, while I have Indigenous heritage, I did not grow up in the culture. I know now though, that my father would be proud of me, for this is our home.”

Purcell also spoke. “We should be interacting as communities more, and today, this is a start. I took my grandchildren to a pow-wow and was amazed to see how my grandchildren interacted with the other children,” he said. “Kids love the traditional dress and here are these other kids, dancing in their regalia.”

On the Day of National Truth and Reconciliation, he said: “Instead of making it a holiday where you send your workers home early, it should be a day of learning and understanding about Indigenous people and their culture. Do something to learn or make a difference.”