“Whether it’s helping veterans get the resources or educating young families and children about why we remember, Ron has been an integral part of that for almost 40 years.”

Karen Vecchio, Member of Parliament for Elgin-Middlesex-London, presenting Ronald Jewell with Minister of Veterans the Affairs Commendation for his work with the Canadian Legion.

That’s what Karen Vecchio, Member of Parliament for Elgin-Middlesex-London, had to say about Ronald Jewell after he was honoured with the Minister of Veterans Affairs Commendation.

She said it’s recognition from the highest level of government for the exceptional work Jewell has done for the community through the Royal Canadian Legion.

For the last 39 years, Jewell has served in many roles in the Legion as president, past president and vice president to name a few. 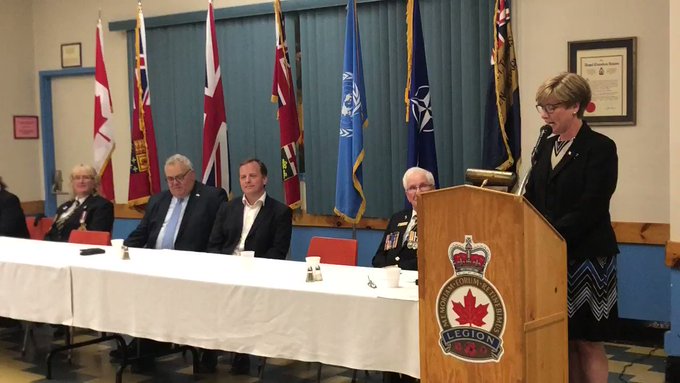 In his current position, he assists veterans, widows and their families with befit requests as well as helping to organize the annual Remembrance Day Services and visiting Veterans in the local care home in his spare time.

“Not only was he in battle himself and has served in the Canadian armed forces, but he knows the resources and understands what they (veterans) need.”

Having served in the Canadian armed force for 28 years, Jewell travelled across the globe to places like Korea, Germany and Cyprus before retiring and joining the legion in 1980.

In 2016, Jewell ensured the St. Thomas cenotaph was updated to include soldiers who served in Afghanistan, NATO and on United Nations peacekeeping missions.

He said it’s an honour to be recognized, but added recognition is not why he got involved in the first place.

“A long time ago when I first got out of the military, some of the guys from 91st, which is the First World War, were still alive, and I promised them that I would always keep the wreath going at the cenotaph,” he said.