As the Liberals navigate the controversial contract to export light armoured vehicles to Saudi Arabia, fuelling talk of job losses in London, Ont., is ‘foolish’ in an election year, says a former Tory MP.

The fallout for the southwestern Ontario epicentre of a controversial arms export deal with Saudi Arabia could be devastating if the contract is cancelled, with the wrong people paying the price, say opposition MPs.

With four federal ridings in play and thousands of jobs potentially in the wind, talk of scrapping the contract in an election year would be “foolish,” says a former London, Ont.-area MP. 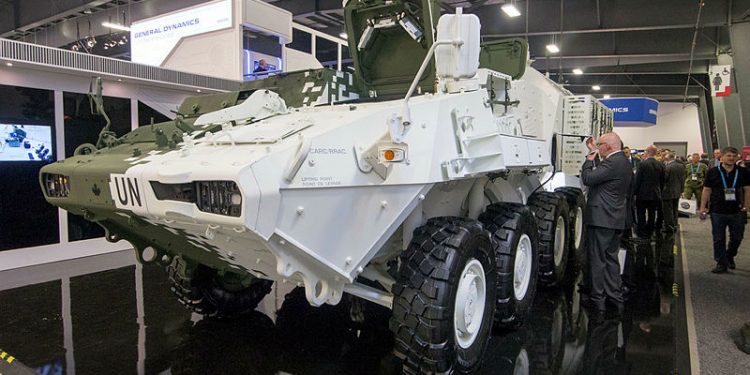 General Dynamics Land Systems’ sale of light armoured vehicles to Saudi Arabia is under threat, as Prime Minister Justin Trudeau has indicated his government is trying to find a way out of the multi-billion-dollar deal. The Hill Times file photograph

All three major parties have seats to protect in the area. The Liberals flipped two Conservative-held (but traditionally Grit) seats in 2015 in London North Centre and London West, while the NDP and the Conservatives both held London–Fanshawe and Elgin–Middlesex–London, respectively.

The LAV sale, which is believed to be worth between $13-billion and $15-billion, was originally penned under the government of former Conservative prime minister Stephen Harper.

Concern over cancellation of the export permits increased in December when Prime Minister Justin Trudeau (Papineau, Que.) said that Canada was attempting to find a way to stop the sale of light armoured vehicles (LAVs) to Saudi Arabia.

MbS also serves as the kingdom’s defence minister, and has presided over Saudi Arabia’s intervention in the Yemen civil war, where estimates of civilians killed range from 10,000 to more than 60,000. The United Nations estimates that 60 per cent of the casualties have been the result of Saudi bombing. An October analysis by Mark Lowcock, UN undersecretary general for humanitarian affairs and emergency relief coordinator, found that 14 million Yemenis are on the brink of famine.

A Nov. 30 National Observer report suggested the Canadian-made LAVs are being used in the conflict in Yemen.

But there is an overriding concern that the cancellation of the export permits would be catastrophic for the London region. 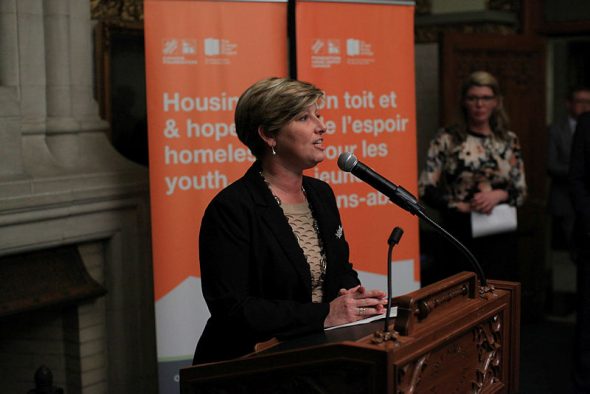 “As soon as there was this discussion about these contracts being cancelled, [we got] calls from mayors [and] calls from secondary businesses associated with GDLS,” Conservative MP Karen Vecchio (Elgin-Middlesex-London, Ont.) said. “So there is great angst.”

Ms. Vecchio said the economic impact of a cancellation would “devastate” the region, and it can’t be treated as a political issue.

“We should be all rowing in the same direction, making sure we are keeping jobs here in London,” she said. The GDLS factory employs more than 2,000 workers.

NDP MP Irene Mathyssen (London-Fanshawe, Ont.), who favours the cancellation of the export permits, said London workers who will be directly or indirectly affected by a cancellation will be the ones paying the price for Mr. Trudeau’s and Mr. Harper’s “arrogance, and/or stupidity, and/or political gamesmanship.”

Joe Preston, mayor of nearby St. Thomas, Ont., and the former Conservative MP for Ms. Vecchio’s riding from 2004 to 2015, said he would be “quite concerned” if he were representing Ms. Mathyssen’s riding, where the GDLS plant is located, and fuelling the rhetoric about job losses.

“Just the talk of [cancellation] has got certain people’s attention … [and] any foolish [talks] of changing contracts already in place would be not a very wise thing in an election year,” Mr. Preston said.

GDLS plant in London under threat if LAV deal is cancelled: analyst

General Dynamics said in a December statement if Canada cancels the contract it would “incur billions of dollars of liability.”

“Terminating the contract would have a significant negative impact on our highly skilled employees, our supply chain across Canada, and the Canadian defence sector broadly,” the statement read.

David Perry, a defence analyst at the Canadian Global Affairs Institute, said if the export permits are cancelled he would have “significant concerns” about the future of the London plant.

Both underscored the importance of human rights in Canada’s foreign policy, as well as the government’s responsibilities to the workers of London. They said they have raised the issue with Mr. Trudeau and Foreign Affairs Minister Chrystia Freeland (University-Rosedale, Ont.).

“I will continue to be a voice for the people of my community so that a balance between our country’s human rights obligations and our responsibilities to workers can be achieved,” Ms. Young wrote. She added: “I want to stress that our government recognizes the economic perspective of the issue and my current focus—as it has always been—is on ensuring the best interests of the workers at the plant and in the regional supply chain.”

“I will keep advocating for policy options that maintain jobs and the vitality of our local businesses.,” Mr. Fragiskatos said.

Mr. Perry said his impression is Global Affairs Canada didn’t find any evidence of misuse of the LAVs by Saudi Arabia.

Mr. Perry said given the export permits are still intact, the grounds on which they were issued are still valid, and when previous reviews of the permits were performed, the reviews found nothing of merit that would lead to their cancellation.

He said a cancellation would introduce uncertainty for the General Dynamics main office in the U.S., and it may evaluate moving its business out of Canada to a country that offers greater certainty over where it can export its products.

On Nov. 30 in the House of Commons, Liberal MP Pamela Goldsmith-Jones (West Vancouver–Sunshine Coast–Sea to Sky Country, B.C.), the parliamentary secretary to the foreign affairs minister, said the government is “actively” reviewing the export permits for LAVs to Saudi Arabia, and while the review is being conducted, no new permits will be issued.

“We require and expect that Canadian arms exports are used in a way that fully respects human rights,” Ms. Goldsmith-Jones told the House. “If there is evidence that Canadians arms are being misused or have been diverted, we will suspend those export permits as we have done in the past.”

Ms. Mathyssen said—just as in 2015, when there was political gamesmanship over the contract—the Liberals and Conservatives are “game playing” at the expense of the workers and their families.

“It makes me furious that they can do this with impunity and play games with people’s lives and futures,” she said, adding neither the Harper nor Trudeau governments were able to find a reliable partner for the LAVs.

“It’s not business as usual, not when human rights are involved,” said Ms. Mathyssen, who is not seeking re-election in October’s race.

Lindsay Mathyssen, Irene Mathyssen’s daughter who will run as the NDP candidate in her mother’s place in October, said there has to be protection for the workers but not at the cost of Canada’s human rights obligations.

“These two governments—the current and the past—signed deals with a very unreliable partner,” she said. “They have had a significant amount of time to look at alternatives to figure it out, knowing full well the Saudis are violating key international human rights treaties.”

“I hope the voters remember the lack of action from the Liberals.”

Both Irene and Lindsay Mathyssen said the factory could be producing LAVs for the Canadian Armed Forces, which is projected to be opening a bid to procure vehicles this year.

Mr. Perry said even if General Dynamics wins the procurement bid, it would be a mitigation, and not a replacement project, because it falls significantly short of the $13-billion to $15-billion LAV deal with Saudi Arabia.

He added there are other problems with the idea, such as the vehicles exported to Saudi Arabia fill far different requirements for the Saudi military compared to what will be needed by the Canadian Forces.