OTTAWA, May 30, 2019 /CNW/ - Labatt Breweries of Canada has brought together MPs from across the country to put partisanship aside and represent their region in Election Brew – the first-ever all-party national brewing competition in support of Equal Voice.

Honourary brewmaster, Nick Whalen, MP, St. John's East, Newfoundland and Labrador, took home the Election Brew title with his Wählen Whalen Weiss brew during a tasting reception in Ottawa on May 29th. As part of Labatt's commitment to Canada and ensuring a strong, healthy democratic system, Labatt pledged $25,000 to Equal Voice on behalf of the winning brew. 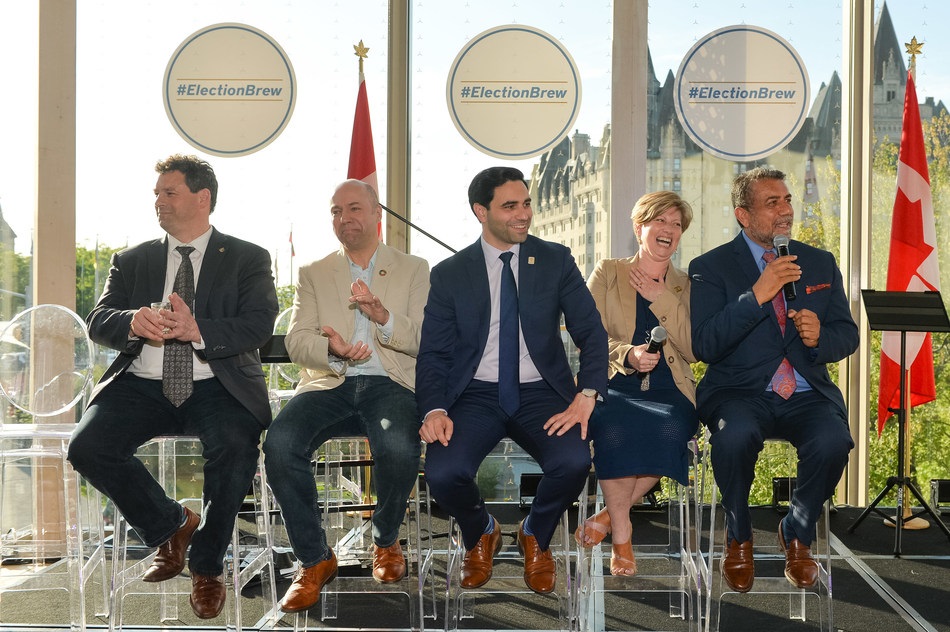 "It's wonderful to see candidates coming together for friendly competition outside of politics," said Eleanor Fast, Executive Director of Equal Voice. "Election Brew is a great example of Equal Voice's commitment to multi-partisan events that shed light on the importance of equal representation of women at all levels of political office. We appreciate the support of Labatt and the candidates."

MPs from all political parties joined forces and worked with Labatt brewmasters to create a unique beer using local ingredients that highlight their respective regions. The competition featured six beers brewed at Labatt facilities across the country, which were tasted and critiqued by an esteemed panel of judges.

"Beer has been bringing Canadians together for generations – it's part of the fabric of our country," said Charlie Angelakos, Vice President, Legal and Corporate Affairs, Labatt Breweries of Canada. "With Election Brew, we're able to put politics aside and celebrate what's truly great about Canada – civil democracy and the values we all share as Canadians."

As Canada's leading brewer, Labatt's 3,500-plus employees play a role in brewing and distributing more than 60 brands – from craft beers to iconic Canadian favourites – from brewing facilities and brew pubs coast-to-coast.

"For more than 170 years, Labatt has been an active supporter of Canadian communities and a proponent of civil democracy," said Angelakos. "We're proud of that history and proud to be helping Equal Voice shine a spotlight on the importance of having more women in politics."

Equal Voice is a national, bilingual, multi-partisan organization dedicated to electing more women to all levels of political office in Canada. Equal Voice regards the equal representation of women in Canada's Parliament, in our provincial/territorial legislatures, and on municipal and band councils, as a fundamental question of fairness for women in terms of their access to Canada's democratic institutions. Founded in 2001, Equal Voice brings women and men together from across the political spectrum in its nine chapters across the country.  They include chapters in: British Columbia, Alberta (south and north), Ontario (Toronto and Ottawa), Saskatchewan, three of the four Atlantic provinces (Nova Scotia, Newfoundland and Labrador, and New Brunswick), as well as a dynamic national youth chapter.

About Labatt Breweries of Canada

Established by John Kinder Labatt in London, Ontario in 1847, Labatt Breweries is one of Canada's founding businesses and its leading brewer. The company today has more than 3,500 employees, six breweries, three stand-alone craft brewers, and a portfolio of 60 quality beers, including Budweiser, Bud Light, Alexander Keith's, Labatt Blue, Kokanee, Stella Artois and Corona. Brands also include ready-to-drink beverages such as Palm Bay and Mike's Hard Lemonade. As part of the Anheuser-Busch InBev family, Labatt is committed to Bring People Together for a Better World, making a positive contribution through multiple programs that support its communities, promote responsible drinking and protect the environment.